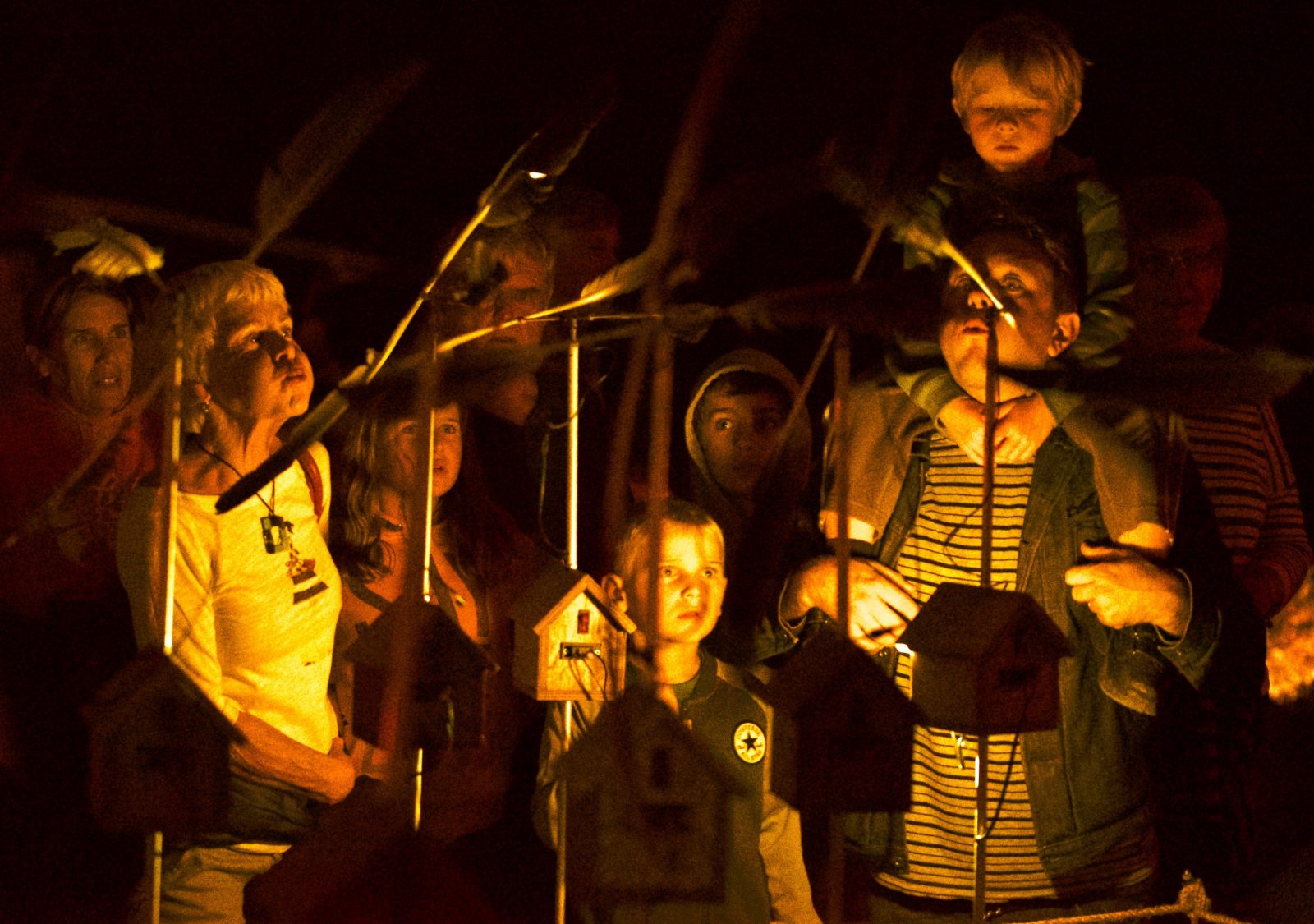 An immersive night-time journey into a wild avian landscape

About For the Birds

For the Birds is an immersive night time walk into a wild, avian landscape. A group show by artists Jony Easterby, Kathy Hinde, Mark Anderson, Ulf Pedersen and Pippa Taylor. Premiered at the stunning RSPB reserve Ynys-hir in mid Wales, during October 2014, and showcased at Otari Wilton’s Bush, Wellington for the New Zealand Festival in March 2016 and Brighton Festival and Durham Lumiere 2017 to huge audiences.

For the Birds invites the public on a meditative and immersive journey from dusk until dark through a woodland which is transformed by a series of bespoke light and sound installations.  As transient and light as the birds themselves, these installations are all created using low cost, low power equipment suitable for remote places.

Birds offer human imagination mystery and beauty, of other lands, other ways of being, of resilience, of renewal. They are sign-bearers, omens. Twitter gives a new spin to the medieval alchemists’ language of birds, which translated what was divine and of the air into the earth of humanity and the mundane. As the huge global industry of garden-bird nurture, led by the RSPB in the UK testifies, their presence makes us feel good. But what about when we interact with birds directly and face their physical and ecological reality? What important messages do they offer in creating a home that affirms all life for a sustainable future? And what inspiration and strength can we draw?

RSPB Ynys-hir – Working with the RSPB was an exciting and mutually beneficial relationship in order to realise this project. In providing this exceptional site of conserved land that resonates deeply with the projects themes with the opportunity to create an experience that celebrates the work of Ynys-hir, sharing and expanding our different audiences to draw the public in. The project team involved volunteers and staff at every stage of planning and development.. It is hoped that this new relationship will inspire further touring of For the Birds to othere conservation sites now the pilot is complete.

Background to the project

For the Birds emerged from two years of new experimentations in concepts, techniques and practice by the artists in collaboration with high profile arts and non-arts organisations in the last two years, in Wales and internationally. This work includes:

Sounding the River A journey of sound, light and performance along the banks of the River Rea. Curated and produced by Easterby alongside Anderson, Hinde and Tew in collaboration with mac Birmingham to celebrate their 50th anniversary.

Powerplant The highlight of Liverpool City of culture this show that has won critical acclaim in major festivals around the world. Five artists including Easterby, Pedersen and Anderson create over thirty site-specific installations which transform public parks and botanical gardens into inspiring nocturnal environments.

Leverhulme Fellowship Landscape and Protection. A year long R&D project by Easterby in collaboration with the Centre for Alternative Technology, exploring methodology to communicate concepts of ecology, biodiversity and sustainability. Funded by The Leverhulme Trust.

Estuary lab A week long performance research and development lab led by Easterby in the tidal zone of the river Dyfi working with a range of local and international artists supported by National Theatre Wales.

Motivated by the belief that an ecologically diverse landscape is essential for people, for planet and for sustainability, this work has explored the methods and changing perceptions of land use and its implications, and how to communicate these issues within the public realm through the contrasting mediums of the arts, science and technology.

The project was led by Easterby and his team, including planning, fundraising, finance, production, management and execution of the artistic production.

Funding for the project has come from the Arts Council Wales alongside a research grant from National Theatre of Wales. Support in kind from Aberystwyth Arts Center and RSPB, this includes some marketing, box office and production on site such as car parking and volunteer support. This was supplemented with box office income from the show.